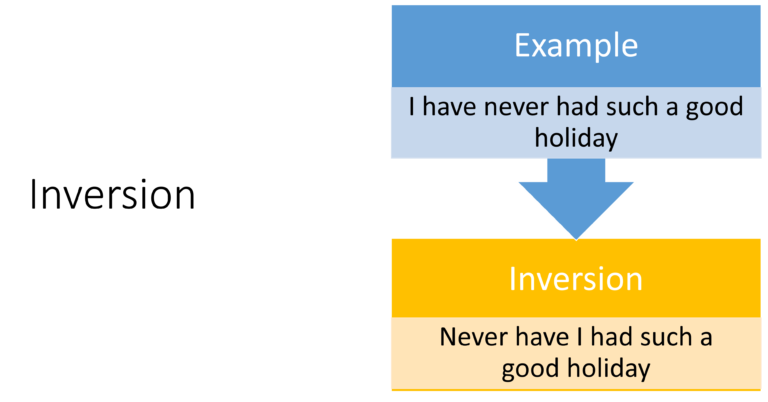 Inversion is a way of changing the information placed at the beginning of a sentence and in this post we will looked at a variety of different ways that we can use inversion. Because it changes the focus on information it can be a very good way of emphasizing details. It’s also considered a more complex and sophisticated way of combining ideas together.

In this respect it can be a very useful structure to organise formal writing and speaking.

There are two types of ways we can use inversion. In this section we look at details on what is most easily recognized where we change the verb form at the beginning of a sentence following certain types of expressions.

The first group of words are negative forms, typically adverbs.

Let’s look at an example

Finally, we have a group of words where an extra change is required in the sentence because they are fixed expressions.

This group is follows

There is another group of expressions that we can use which are positive but they still have the same effect on the verb, by inverting it.

We can use these two words at the beginning of sentences.

We can invert conditionals and this makes them much more formal. There are also particular types of conditional structures we tend to use as you can see from the examples below.

The final method is where we invert we change position of the nouns and verbs and effectively swap them. This type of style is very useful in something like storytelling and is particularly common with books for very young children. It can have the effect of making text more immediate and possibly exciting.

It is an alternative but at the same time it may not always be something that you can use too often in a writing exercise. Here are some examples of it.

Inversion can be a very good way to change focus, to show an ability to use more complex forms and also to demonstrate more variety in your language. Nevertheless, it’s not something that should be used too much as it can make writing very difficult to read.  So, it is probably a good thing to consider when you are deciding to use it whether it’s appropriate and useful in that situation.

Ready to Test Yourself?

You have already completed the quiz before. Hence you can not start it again.

You have to finish following quiz, to start this quiz:

We use cookies on our website to give you the most relevant experience by remembering your preferences and repeat visits. By clicking “ACCEPT ALL”, you consent to the use of ALL the cookies. However, you may visit "Cookie Settings" to provide a controlled consent.
Cookie SettingsREJECT ALLACCEPT ALL
Manage consent

This website uses cookies to improve your experience while you navigate through the website. Out of these, the cookies that are categorized as necessary are stored on your browser as they are essential for the working of basic functionalities of the website. We also use third-party cookies that help us analyze and understand how you use this website. These cookies will be stored in your browser only with your consent. You also have the option to opt-out of these cookies. But opting out of some of these cookies may affect your browsing experience.
Necessary Always Enabled
Necessary cookies are absolutely essential for the website to function properly. These cookies ensure basic functionalities and security features of the website, anonymously.
Functional
Functional cookies help to perform certain functionalities like sharing the content of the website on social media platforms, collect feedbacks, and other third-party features.
Performance
Performance cookies are used to understand and analyze the key performance indexes of the website which helps in delivering a better user experience for the visitors.
Analytics
Analytical cookies are used to understand how visitors interact with the website. These cookies help provide information on metrics the number of visitors, bounce rate, traffic source, etc.
Advertisement
Advertisement cookies are used to provide visitors with relevant ads and marketing campaigns. These cookies track visitors across websites and collect information to provide customized ads.
Others
Other uncategorized cookies are those that are being analyzed and have not been classified into a category as yet.
SAVE & ACCEPT

Learn all about the Cambridge First exam, how it is organised and what each of the different parts is about.

–  Explore each part of each exam.

–  6 hours of extra practice exercises to improve reading, Use of English and Writing performance.

Go to the Udemy Course